Say no to private clearcuts on Vancouver Island

One-fifth of Vancouver Island’s land is owned by two companies in private managed forests — Island Timberlands and Timberwest. These private forests include many community watersheds like the Cowichan River, the Koksilah, the Shawnigan Watershed, and the China Creek watershed.

Private landowners can liquidate forests with little concern for wildlife, water, and local communities. Landowners are not required to consult with affected residents in spite of the very real, on-the-ground impacts from logging. Minimal regulations means there’s no requirement to consider long-term sustainability. The Province is allowing forests on private land to be leveled with little input from communities, indigenous nations and local governments.

Successive provincial governments have promised, and failed, to come up with protective rules for logging on private land. Communities have had to step up and take action. One of BC’s most notable examples of this was a $58.9 million deal back in 2008: to protect Victoria’s future water source, Vancouver Island’s Capital Regional District purchased 88 square kilometer of private forest from Timberwest Forest Corporation. Local residents are now covering the bill through special levies on their water bills.

The lack of regulations for private land logging has shifted the burden to communities, forcing British Columbians to pay the price for lax provincial rules that let big companies claim tax breaks after clearcutting vast areas. Water, wildlife, and community recreation suffer in community after community when private land logging destroys forests. The Union of BC Municipalities (UBCM) has passed 15 resolutions dating back to 1991 asking the province to reform private land logging regulations, yet no real action has been taken.

Landowners get very substantial tax breaks for registering property as a private managed forest. Big, corporate landowners who benefit from these tax breaks can liquidate forests with little concern for wildlife, water, or local communities. 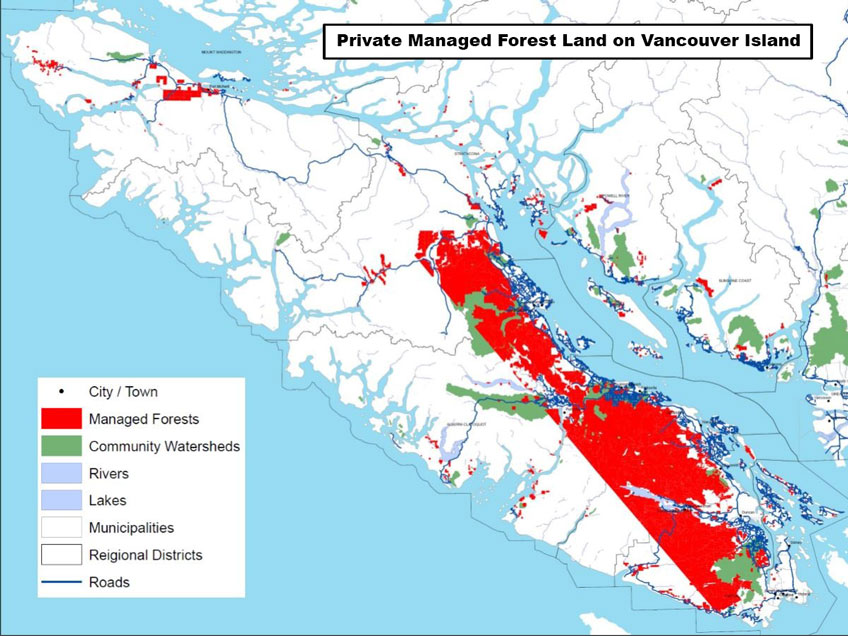 Your message for forests